Easter weekend camping is a relatively new tradition. This is our second year, to be exact. Last year, we started pondering over the meaning of Easter and it being the symbol of rejuvenation and rebirth. So we decided that there was no better place to celebrate it than in nature where the magic of rebirth happens every spring. Plus kids love Easter egg hunt in the actual forest even though they have long outgrown the age of believing in Easter bunny.

This year we chose Pinery Provincial Park as our camping destination for a number of reasons. There was more chance that it would be snow free compared to, say, Algonquin or Killarney. The route to Pinery conveniently lies through Waterloo where we could pick up our older son and then drop him off on the way back. We were also hoping to catch tundra swans taking a break on their way north. Finally, it is always fun to see some of our favourite parks during a different season. So far Pinery has been the destination for many enjoyable summer trips and one memorable New Year celebration. This was a chance to see it on the cusp of season change. 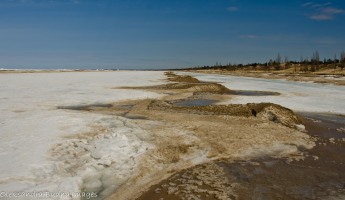 We left late Thursday night and with a stop at Waterloo, we arrived at the park close to one in the morning to find our yurt locked. In the hindsight, we should have called the park to warn them about our late arrival but on previous late arrivals at other parks we would find the yurt open with the key left inside or alternately locked but with the key left in an envelope near the registration office. We spent an hour driving around the park trying to locate someone to open the yurt for us, found an emergency phone, alerted the guard, woke up the ranger on duty. In short, it was quite an adventurous start to our trip.

Needless to say, we slept in the next morning. When we finally got outside, it was a nice and warm day. The park was surprisingly busy with almost all yurts occupied, and trailers and a few tents visible on the surrounding campsites.

We spent the first half of the day biking around the park. In the summer, riding the 14-kilometre Savannah trail and finishing with ice-cream is a long established tradition. But since the ice-cream counter and the store were closed for the season, our younger son proclaimed that riding the trail would be pointless. We biked along park roads instead, explored the Old Ausable River Channel, which was still frozen on one side of the bridge and completely ice-free on the other. We even saw a lonely canoeist on the water and felt quite jealous of him but canoes were chained for the season as well. 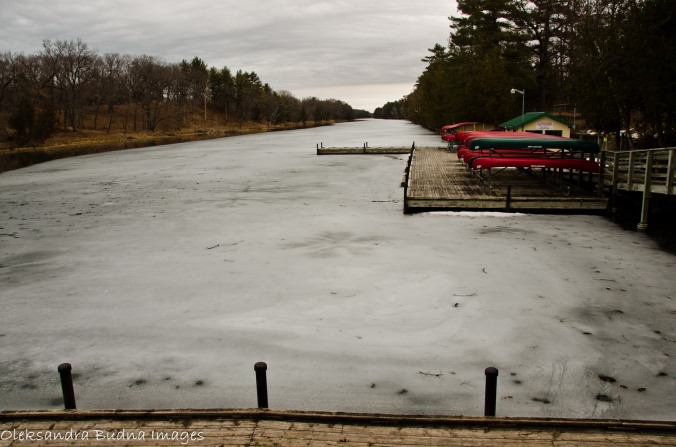 We then biked over to the beach. Lake Huron looked strikingly different from its usually cheerful summer self. Covered in ice and dusted with sand with a narrow strip of turquoise water in the distance and clouds overhead, it was eerily beautiful.

By then, the wind picked up and it was quite chilly, so we rode back to the campsite. Right on time too. Because the moment we finished cooking the soup, it started to rain and we retreated inside the yurt. With a bowl of hearty soup inside our bellies and the patter of rain on the yurt roof, we enjoyed restful time reading and napping. Once it cleared up, we ate veggie burgers around the campfire and then back inside played our favourite game, Settlers of Catan, well into the night.

Day 2 was gorgeous, all beautiful spring sunshine and blue skies. We rode over to the visitor centre to watch all sorts of birds twittering and chirping around the bird feeders. 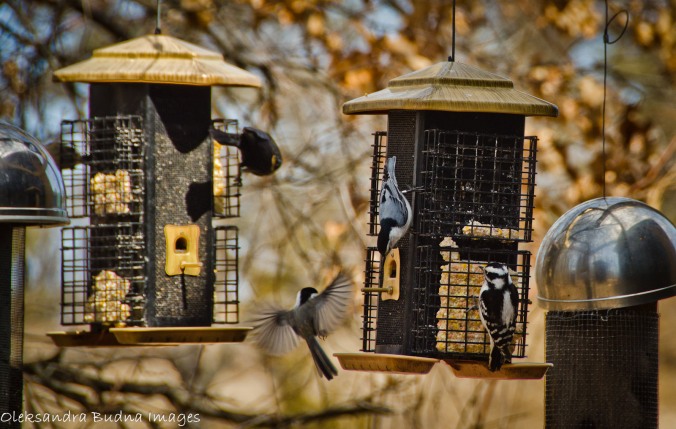 We then hiked Cedar Trail, which is only 2.3 km long and starts right near the visitor centre. It has a great lookout platform over the channel, where we spotted an otter in the water (or at least we think it was an otter since it was pretty far away). 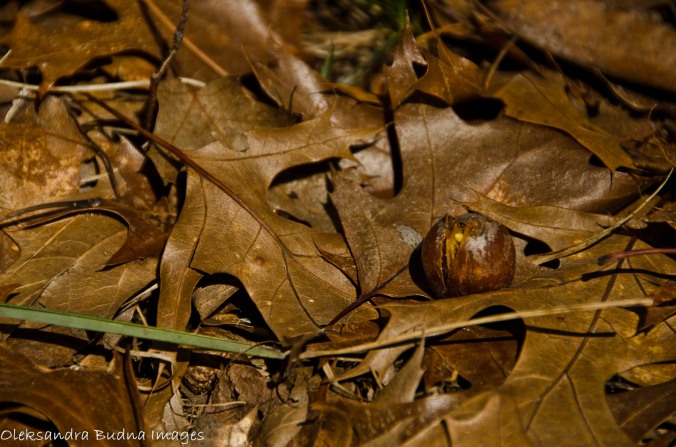 There is also a trail extension that leads to the beach. That day, the beach looked brighter with the sunlight against the blue sky. The ice cover alternated between sand dusted frozen waves, long stretches of white and then ice chunks as far as the eye could see. One brave, or maybe just stupid, kid actually rode a fat bike over the lake. 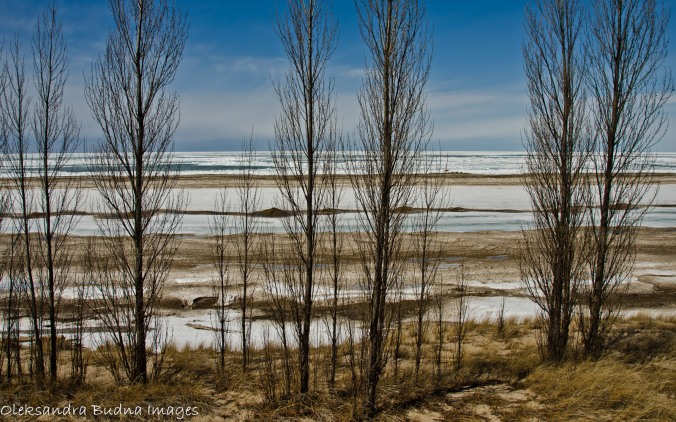 That day we also drove to the field behind the Lambton Museum to see tundra swans. Yes, they were still there! Because the winter was so cold, they arrived later than usual this year (so cold winters do have their bright sides). I was really excited to see them, something I wanted to do ever since I read about tundra swans on the Friends of Pinery website. It was quite a sight and a noisy one too. At night, we could hear them honking overhead while the guy at the next campsite played drums. Those were much better sounds to fall asleep to than the humming of cars back home. 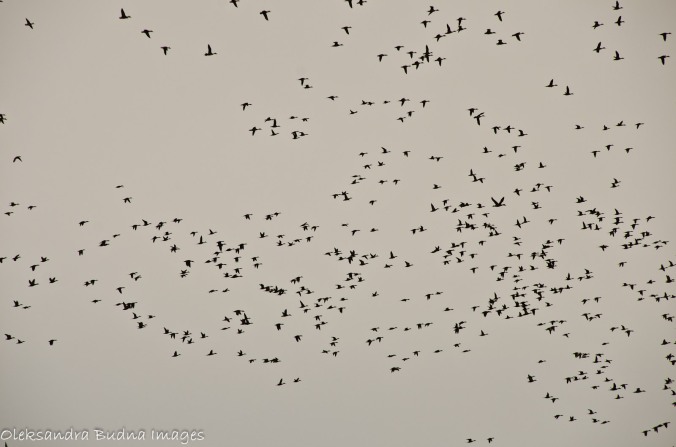 On Easter Sunday, winter staged a short comeback as we woke up to a snow cover outside. 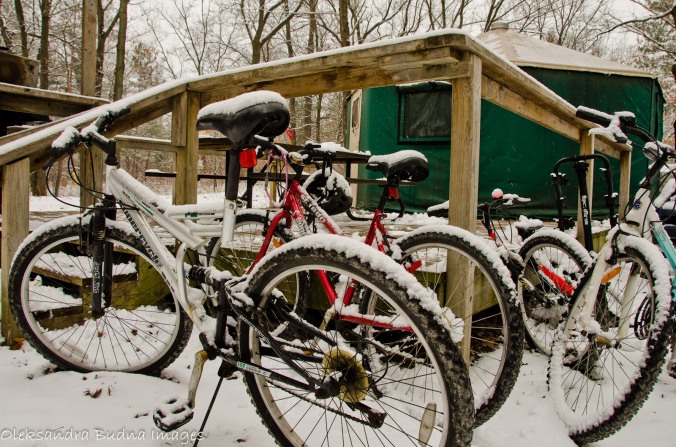 It didn’t stop us from having an Easter egg hunt. In fact, it was quite fun. 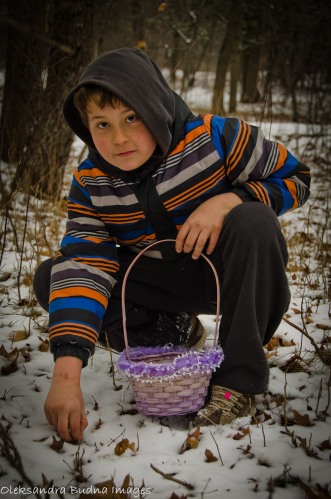 As always, we didn’t want to leave. After we packed, we decided to do another hike, this time on the Nipissing Trail, which took us to the top of the oldest and highest dune ridge and also provided great views of the park with a bit of Lake Huron in the distance. 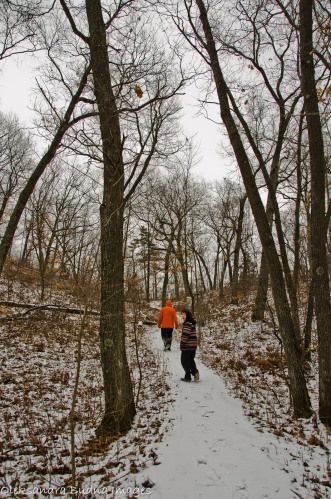 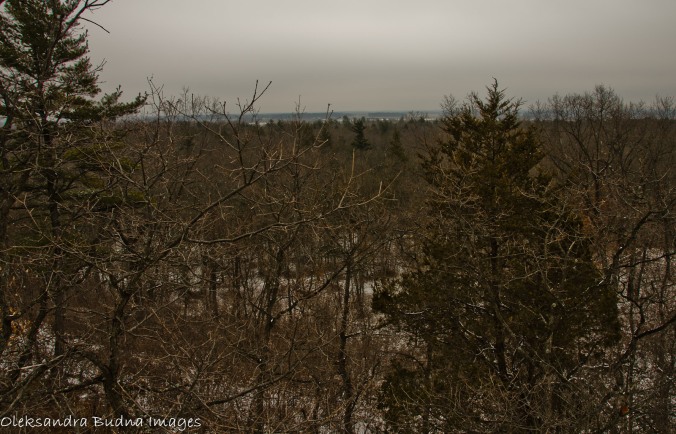 We stopped at Denny’s Drive-in, our favourite fish and chips place at Grand Bend. We were happy to see that they were already open for 2015 season. We brought our blankets and enjoyed our meal outside. 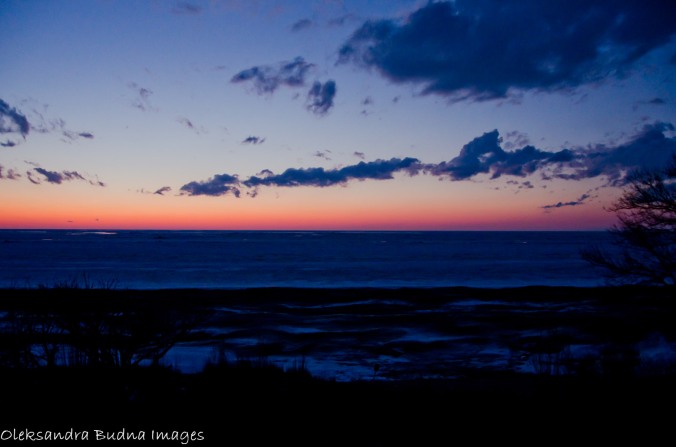 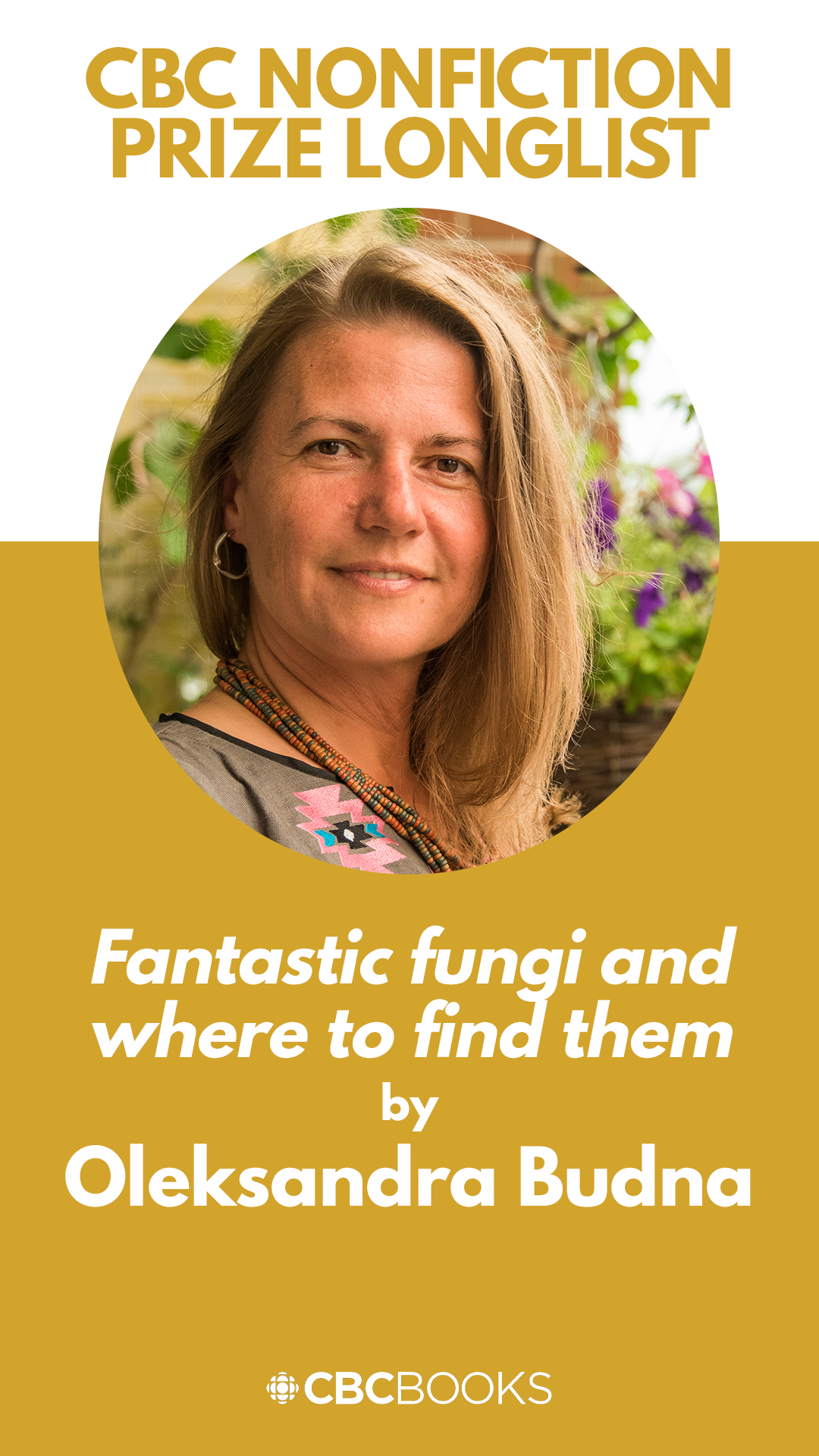 Yesterday was what is known in Ukraine as Zeleni Svyata or Green Holidays. On this day, I always think of my grandparents and all the beautiful traditions associated with this holiday, like decorating the house with linden branches and herbs. On Saturday, together with my friends we made flower wreaths for cows so they walked back home from pasture all dressed up for the occasion. And Green Sunday is the day to gather medicinal herbs because they are imbued with special powers.
Our first canoe trip of the year. Algonquin welcomed us with calm waters, soothing whispering of the forest, puffy clouds and fiery sunsets, loons and mergansers, painted trilliums, new life springing from an old stump... for a few days the world made sense again offering something to hold on to amidst constant uncertainty and dread.
This year, as Easter collides with two months of war, at the intersection of death and a promise of rebirth, ever present dread for the land and people I love and awe of their unwavering spirit and bravery, horror at unimaginable sufferings inflicted by the Russian army and gratitude for all the support for Ukraine extended by people across the world, our Easter basket feels heavy. Heavy with pain and sadness. But it's also filled with hope. Hope inspired by the determination of Ukrainians to find joy and light even during the darkest times: by honouring Easter traditions, decorating their streets with pysanky (Easter eggs) for the holidays and some people baking hundreds of paskas (Easter bread) to ensure those who can't make their own, whether because their home has been destroyed, they were forced to leave it or are currently on the frontlines, can enjoy the taste of Easter too.
A few months ago, in what feels like a different lifetime, I remember being super excited when Blank Spaces magazine accepted my photos and a short piece about our neighbourhood brook. During COVID lockdowns, this narrow strip of water became my escape into nature, my bridge to the world, connection to my childhood and a similar brook that ran behind my grandparents' house in a small village in Ukraine. Now that the story is finally in print, in the fog of war in my home country, so distant and so painfully close, I'm struggling to find my way back to this nameless strip of ankle-deep water that has always been my place of peace...
Sunrise from my childhood home back in Chernivtsi, Ukraine, captured a few years ago.
Killarney always makes my heart sing no matter the season.
Bruce Peninsula is a beautiful place to visit any time of year and now there are yurts available in the winter at the Cyprus Lake campground for a comfortable stay.
Disappearing act: On our first morning at the Cyprus Lake campground, snow and wind worked together to completely erase the line between the land and the sky
More photos from our trip to Bruce Peninsula. It's incredible how winter manages to reshape familiar landscapes: Indian Head Cove, usually bustling with activity, now quiet, with nothing but waves breaking the silence; the famous Grotto decorated with icicle chandeliers; the natural arch hidden under mounds of snow.