“In winter we wait for spring, in spring we wait for summer. Always waiting for something,” says a woman standing next to me in the elevator. I can see her friend nodding vigorously, and I find myself agreeing as well. While I am committed to embracing whatever each season brings, some days it is easier said than done. Case in point: our recent trip to Arrowhead or rather the obstacles of getting there.

Arrowhead Provincial Park is the winter fun central. Name any winter activity, they’ve got it: snowshoeing, cross-country skiing, a skating loop, a tubing hill. And all of it comes with equipment rentals. For many years the park was called the best kept secret in Muskoka, and we spent many a Family Day there. That was before we discovered yurts and cabins in provincial parks so we used to book a hotel room in the nearby Huntsville, spend the day on the trails and then return to our warm beds and the pool at night (it had its charms). Until one year we had to spend over an hour in a car line-up to get into the park. It was clear that the secret was finally out. Seemed like the best way to enjoy Arrowhead was to come on a regular weekend and stay in one of the park’s cabins. Booking one, however, wasn’t an easy task. After years of trying, we finally succeeded and were super excited to go back.

Then the weather had to throw in a wrench. After weeks of season appropriate conditions, winter decided to take a break. Two days before our departure, the temperature crept into positive teens bringing rain. Then it dropped suddenly on Friday causing a flash freeze. The rain transformed into freezing rain, then snow just in time for the evening commute, turning all roads and highways into parking lots. It took my husband three hours to get home. Our son spent close to five hours on a bus from Waterloo (normally a one-hour trip). By the time we were ready to leave for Arrowhead, we’d collectively spent enough time on the road to get to Killarney and back. Good thing Arrowhead isn’t too far away from Toronto. Plus leaving late at night had its advantages: the roads were empty by then.

But as I was seating in the car, with our kids sleeping in the back, trying to stay awake to keep my husband company, I started to question the whole idea of going away on regular weekends in the winter. At least on long weekends, you get an extra day to spend in the woods to compensate for all the trouble you have to go to getting there.

That feeling was gone when we woke up in our cabin the next morning. 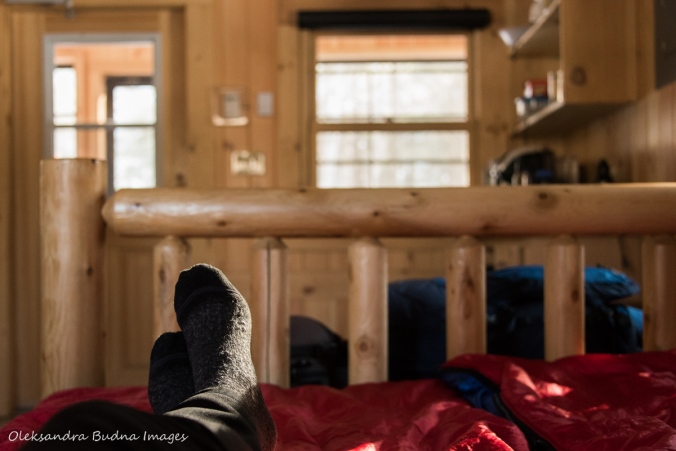 Arrowhead has 10 cabins, all beautiful wood decor trying to look rustic. Although with electric light and heating, a microwave, Keurig coffee maker, electric kettle and fridge, they can hardly be called that. There is also a bbq outside and a large covered veranda with two muskoka chairs. Some amenities are still missing, like running water or indoor plumbing but they are available at a comfort station a few minutes away. 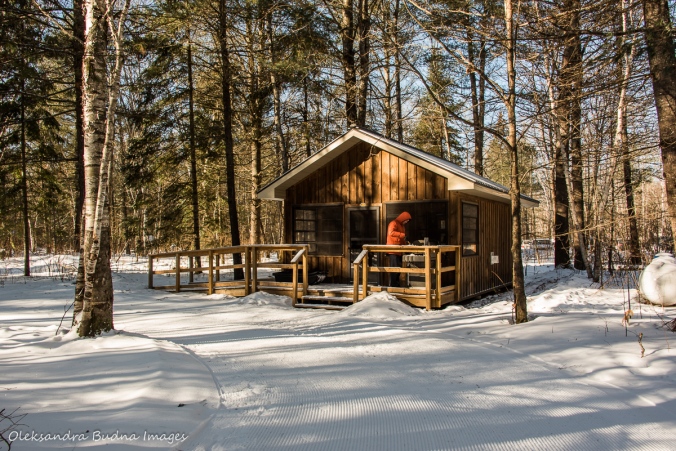 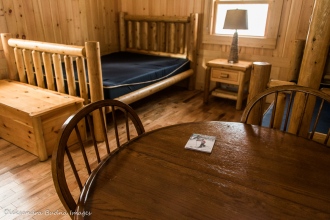 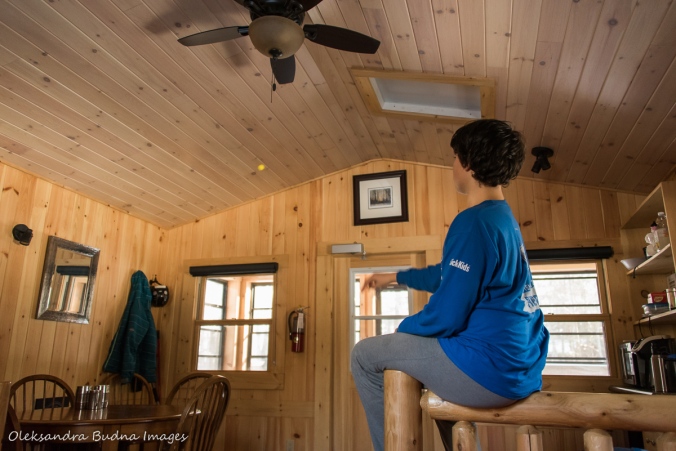 In the winter, the cabins can only be accessed on foot but the walk is very short and toboggans are provided to transport gear. So even though we arrived in the middle of the night, it didn’t take us long to move all our stuff. It took us longer to figure out how to turn on the gas fireplace. It’s not that it was cold with the electric heat on but the fireplace adds a nice ambience. In the end, we gave up on it and went to sleep. The park staff later explained that for the fireplace to kick in we had to turn off electric heat. So we decided not to bother.

The next morning, after we finally figured out how to work the Keurig (what’s wrong with a regular coffee-maker?) and made a decent cup of coffee, we hit the trails. Some of my favourite memories of Arrowhead are about skiing through its snow-covered woods. This time, however, only two very short trails were open so we decided to skip skiing and go snowshoeing to Stubb’s Falls instead. 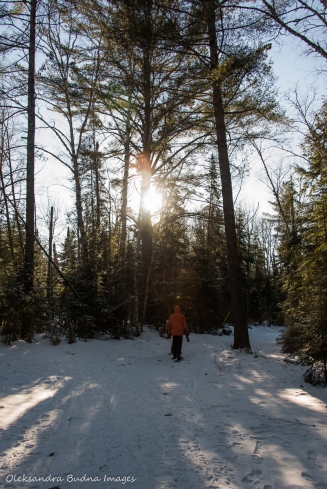 Stubb’s Falls is one of Arrowhead’s landmarks, and it’s always fascinating to watch it change from one season to another. The powerful stream wasn’t completely frozen pushing apart sheets of ice. Our son, as always, couldn’t forgo an opportunity to break some of it apart. 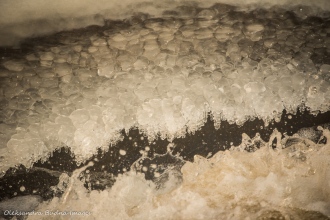 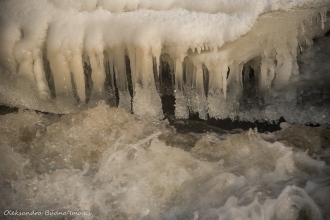 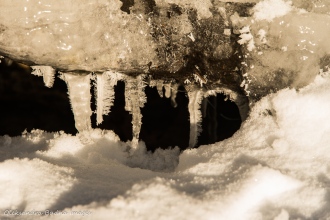 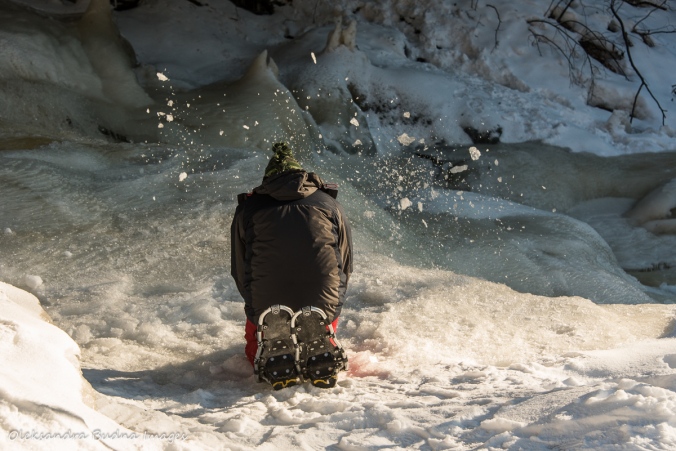 We also made a trip to the Big Bend, another of Arrowhead’s famous spots. A round peninsula sat down below in a white frame of the Big East River. It was hard to believe we once paddled around it.

The park was abuzz with activity, especially a skating loop. The cabin area, however, remained quiet apart from a loud conversation between blue jays and insistent tapping of woodpeckers.

As I stood on the porch on the morning of our departure, crisp air filled with winter joy, all the drama of our arrival seemed to be forgotten. Three days later I stumbled upon an unexpected cancellation at one of the Arrowhead cabins. I couldn’t remember why I thought going away on regular weekends was a bad idea so I booked it. After all, why wait for another season to do something we enjoy?

As a settler on Turtle Island, I appreciate the opportunity to live, work, love, raise my family here and explore this beautiful land. I acknowledge the Indigenous people who have lived here and have been stewards of the lands through which we travel since time immemorial. As a settler, I also commit to expanding my knowledge about the many histories and voices on Turtle Island, honouring the treaties that govern this land, and upholding my responsibilities to Indigenous people, everyone who lives here now and the land itself.