Our younger son likes to share stories, solve math problems and study new scientific concepts while hiking. So during last weekend’s backpacking trip his dad was teaching him about factorials and permutations. Don’t ask me to explain what those are because I wasn’t really listening. I was working on a scientific formula of my own, one that would explain why backpacking works so well as a de-stressor. My theory is that there is only a certain amount of baggage our bodies can handle. So the more weight you pile up on your back and the longer you lug it around, the faster you shed the other kind of weight, the one that is made up of schedules, deadlines, to-do lists and digital noise. Add a few dozen bug bites and there is little else you can think about. 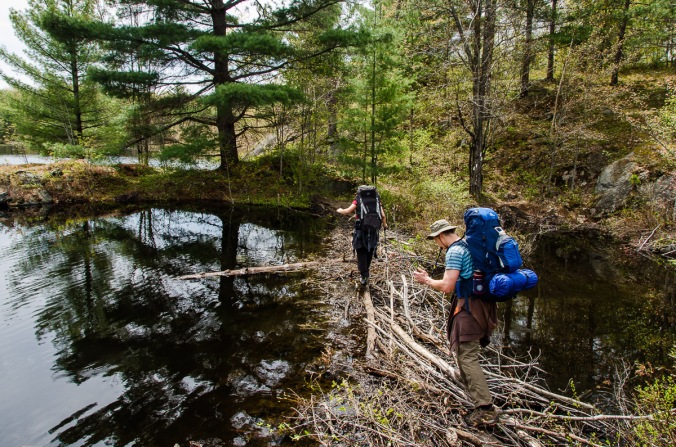 Things have been busy at work lately and a major detox was in order. I knew that car camping wouldn’t cut it so we decided to go backpacking. We chose one of non-operating Ontario Parks with the most absurd, incongruous and very colonial name – Queen Elizabeth II Wildlands (QEIIW). And on Victoria Day, no less. Way too many queens!

Note: a detailed map of QEIIW is available online. You can order a waterproof copy from the same website.

Non-operating parks don’t require booking or payment, which is a big plus. Unfortunately, a lot of people take it as the absence of all rules. I’ve never seen so much garbage in all our years camping at Ontario Parks. We carried out a large bag of trash and only about tenth of it was ours.

A non-operating park also means no facilities or organized campgrounds available, only backcountry camping. With lots of lakes and a section of the famous Ganaraska Trail,  QEIIW offers both canoeing and hiking opportunities. We chose backpacking because until the last minute we weren’t sure if our older son would be joining us and he is no fan of canoeing or anything related to water. (In the end, he couldn’t come because there was too much school work.) 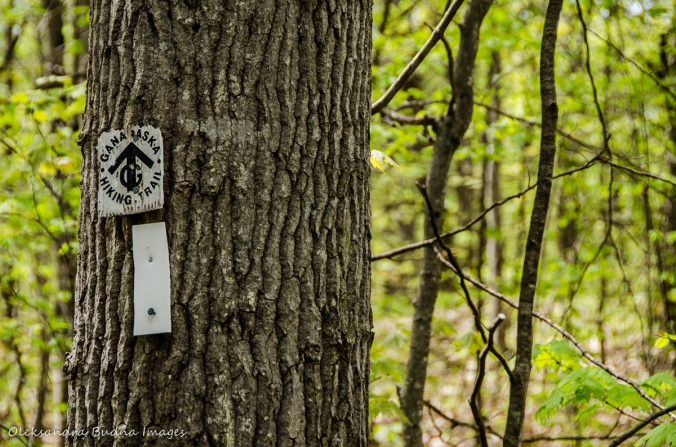 We left Toronto at 8:30 a.m. on Saturday, which is pretty early by our standards, and just about managed to beat the traffic. With a short stop for breakfast, we were in the park around 11. Our starting point was the Devil’s Lake section of Ganaraska Trail. The plan was to hike to  Sheldon Lake, set up camp and then do day hikes to Scrabble Mountain, 2nd highest peak in the park, and the highest peak in the park, which, surprisingly, doesn’t have a name. 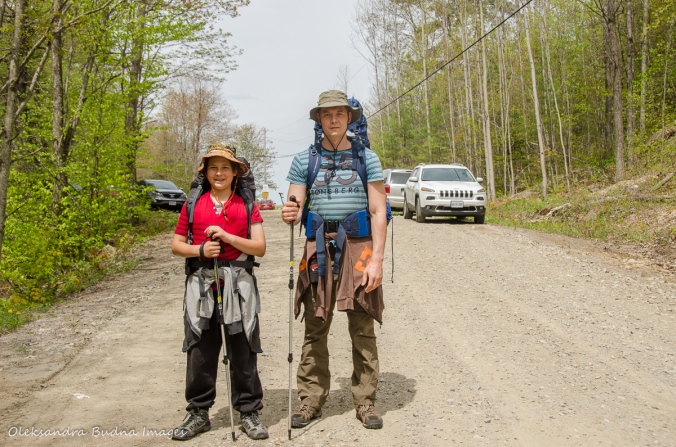 We left our car at the parking lot at the end of the Devil’s Lake Road. It was pretty packed when we arrived (I didn’t count the cars but my estimate is around 20). After some final adjustments and preparations, we were ready to hit the trail at around 11:30. The weather was perfect for camping, and after an unusually cold spring, it was a real stroke of luck. Black flies were already in full force, though, something we realized quite quickly.

The trail lay through the forest, past picturesque lily-covered ponds with turtles sunning on logs. There were a few climbs and some beaver damns to cross. 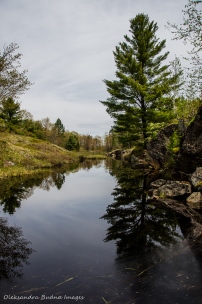 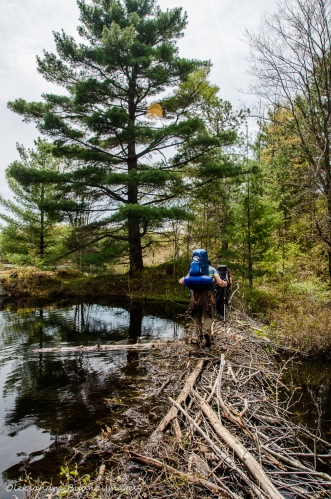 In less than two hours, we arrived at Sheldon Lake. Both ‘official’ sites were already occupied. We found one that wasn’t on our map but had clearly been used many times before. It had some incredible views of the lake so we decided to stay. The site was pretty big but didn’t have much level space for a tent. Our tent just about fit onto the only suitable patch we could find.

There was a nice rocky ledge that we used as our kitchen area and a fire pit with splendid vistas all around. 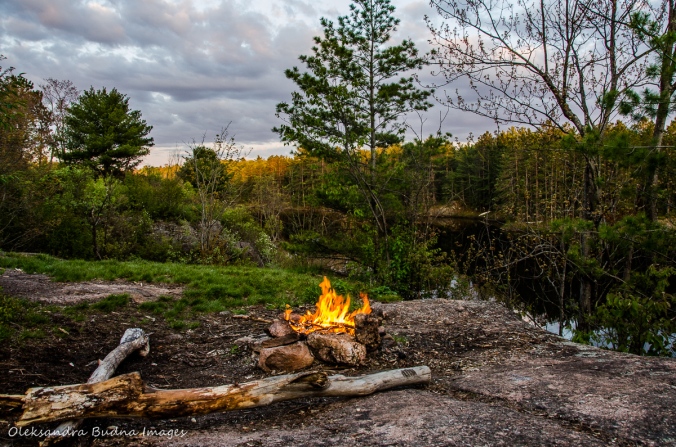 Access to water wasn’t very easy and required a bit of climbing but there were some nice rocks at the bottom, prefect for resting and reading. The only downside was the site’s proximity to the trail. However, not that many people passed by us so it didn’t bother us. Another thing to remember: thunderboxes aren’t always available so bring a small trowel for catholes (here are step-by-step instructions from Leave No Trace on how to properly do your business in the woods when no toilet is available). 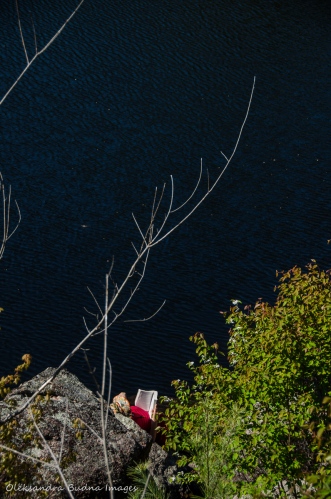 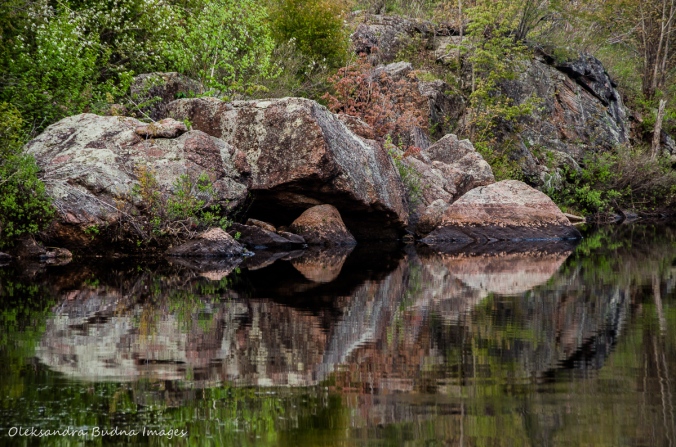 After setting up our tent and having lunch, we still had a lot of time so we decided to tackle the highest peak in the park. It was about three kilometres away from our site with more lake views, wood sections and rocky outcrops. 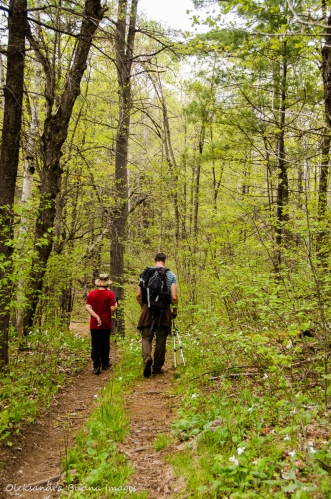 There were some impressive fits of beaver engineering and some less impressive, abandoned reminders of the human world.

The forest floor was covered with spring flowers of all shapes and colours. 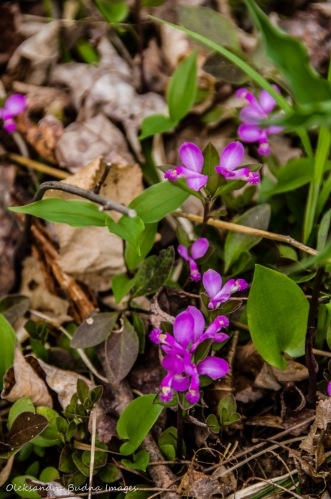 But my favourite was a white carpet of trilliums – spring’s joyful welcome. Photos don’t do justice to Ontario’s most famous flower. 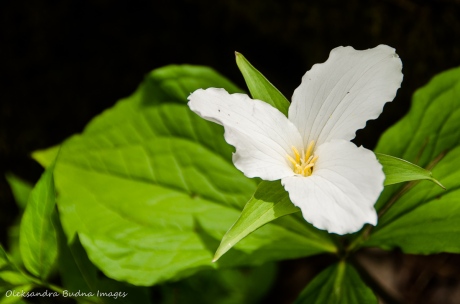 The highest peak isn’t that high, only 375 metres but offers some great views. Too bad we couldn’t enjoy them because the moment we stopped, we were attacked by flies and mosquitoes. So after taking a few photos and collecting empty beer cans strewn around, we headed back to our site.

The evening had ramen noodles, campfire and beautiful views on the menu. 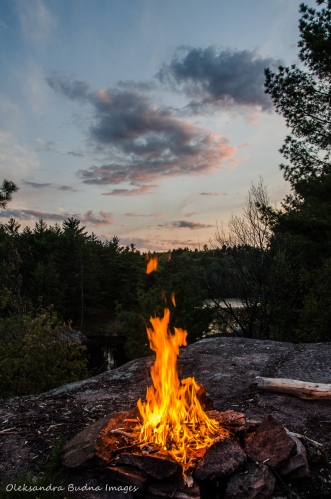 We turned in early but had to first endure a round of fireworks and screams coming from a campsite further down the trail. Once those were done, we could finally enjoy the birds. Well, all but one. Initially I thought that the repetitive, mechanical sound right above our tent couldn’t belong to a bird. It reminded of a hand pump used to inflate air mattresses, which seemed a bit strange because who would bring an air mattress into the backcountry. I then realized that it must have been a saw-whet owl named so because of its cry. In olden days it reminded people of a saw being sharpened; to me, it sounded exactly like an air pump.

Even with all the sounds, we got a very good sleep and started the next morning with a hearty breakfast to prepare for our hike to Scrabble Mountain. 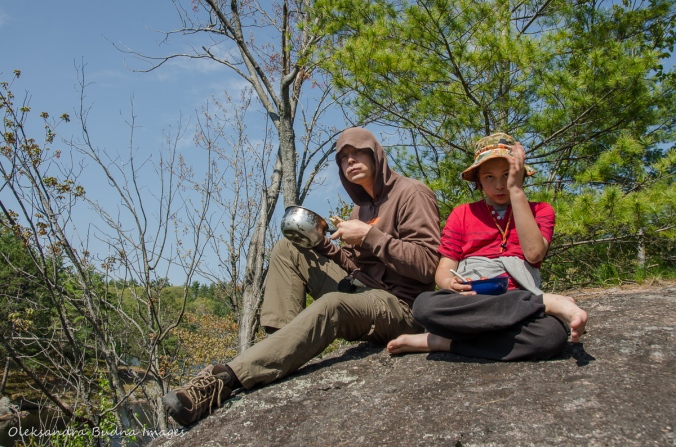 The part of the trail from our campsite to Petticoat Junction was already familiar from the day before. In between permutations and periodic table of elements, our son took time to stop and explore, talking to any wildlife we came across. He apologized to frogs for disturbing their day and even addressed a dead mouse, expressing sympathy that he had to go so early and wishing him all the best wherever he was. 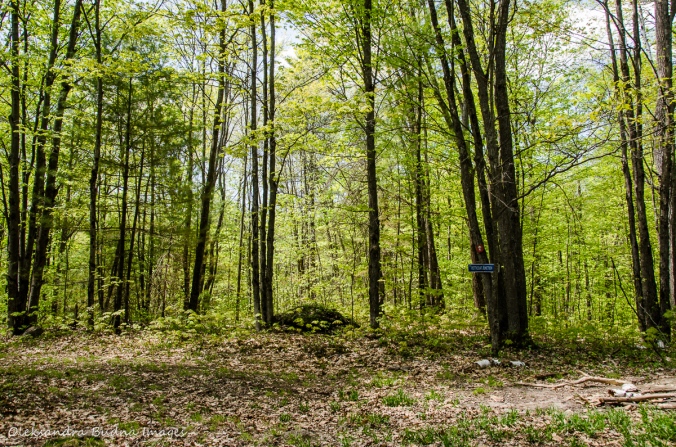 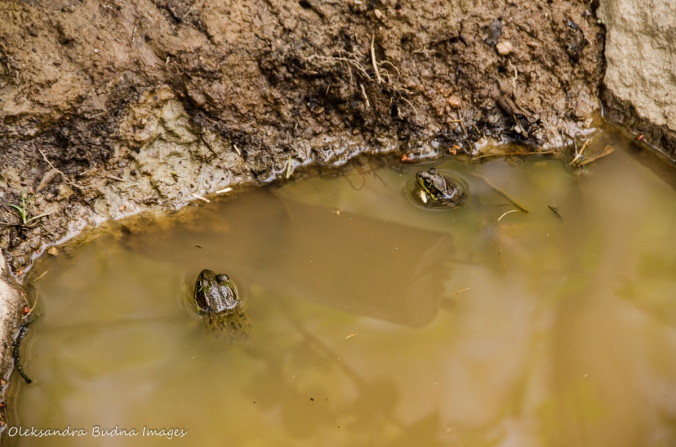 Many sections of the trail were flooded but passable. Until we came to one that wasn’t. With swampy ground on both sides, hard as we tried to find a way around, all we came across was a thick cloud of mosquitoes. Our only choices were to go ahead through the water or go back. We chose the latter. If we were to get wet that day, we preferred to do it in the lake. And that’s exactly what we did when we got back. 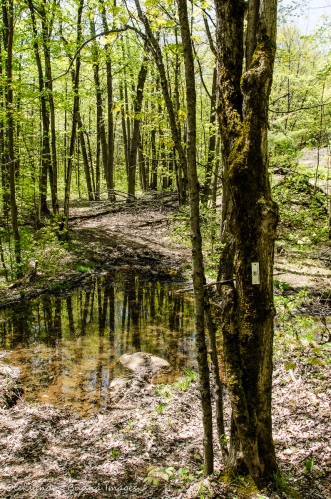 Swimming at the end of May is a rare treat. In all our years of camping, we’ve only managed to do it once. So when I was trying to pack our swim suits, my husband called me overoptimistic and questioned the need to carry extra stuff if we weren’t sure we’d be using it. So I took them out. In the end, underwear worked just fine. Another benefit of backcountry camping: no one cares about your swimming attire simply because no one is there to see you.

The water was on a cool side but on a hot day it felt very refreshing. While we were drying up on the rocks after our swim, we were visited by a five-lined skink. Our son complimented it on its beautiful back.

The rest of the day was spent reading, lounging, catching up on sleep and simply watching clouds – not a bad way to spend a beautiful May afternoon. 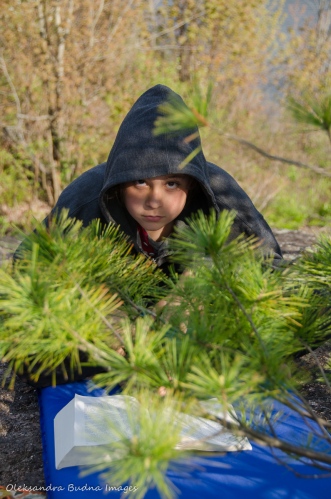 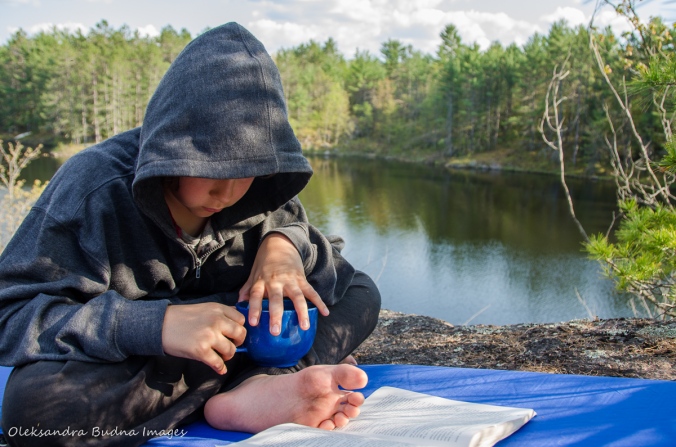 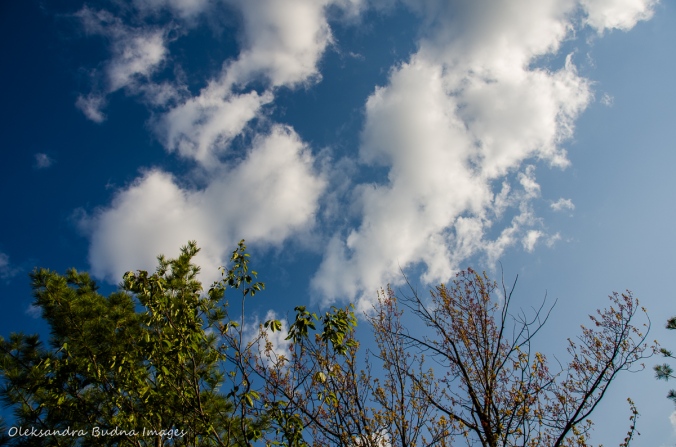 We wrapped up the night with more beautiful skies and a lullaby from our friend, the owl.

The next morning, after a quick oatmeal, we packed our stuff and headed back. 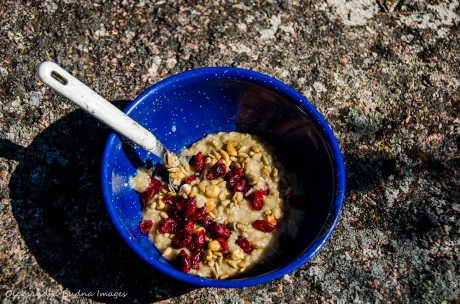 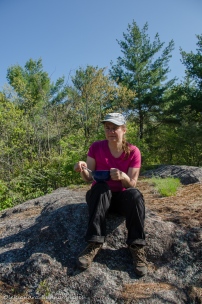 We encountered many turtles and very few people along the way. The parking lot was half empty when we reached it.

Our final stop before driving home was the Riverside Pub in Norland for our traditional fish and chips. I must say it was one of the best fish and chips meals we’ve ever had, a worthy contender for #1 spot, up until now occupied by Killarney’s Herbert Fisheries.

Who said canoeing is for warm months only?
This past weekend at Cabinscape's Aster Cabin in Limberlist Forest and Wildlife Reserve was all about slowing down, wandering through the woods, enjoying the last paddle of the season and getting the first taste of winter. About finding magic in long evenings, between book pages, among bare tree trunks... About embracing this world of sepia and crunchy leaves, and rediscovering the beauty of impermanence...
Foggy mornings are made for wandering and reflections
Nothing like a morning paddle on a beautiful fall day to calm the mind and soothe the soul
Good night, Sleeping Giant
Another year, another incredible solo canoe trip. Although between five kilometres of portaging to and from Norway Lake and a 14-kilometre hike to The Crack, there seemed to be more walking than paddling this time. But whether on land or on water, Killarney never fails to mesmerize and enchant.
Every backcountry trip is a search for solace, serenity and balance, now needed more than ever. And sure our recent trip to Temagami threw a few challenges our way: paddling into the wind and waves, navigating swamps through obstacle courses of logs and stumps, carrying stuff over long portages through mud and clouds of bugs. But all the rewards we got in return! Temagami's rugged beauty, perfect stillness of early mornings, shimmering gold and vibrant reds splashed across evening skies, stories etched into rocks and spilled across lakes, wildlife sightings, whispering pines and loon lullabies... most importantly, finding something to hold on to amidst ongoing turmoil and dread.
Yesterday was what is known in Ukraine as Zeleni Svyata or Green Holidays. On this day, I always think of my grandparents and all the beautiful traditions associated with this holiday, like decorating the house with linden branches and herbs. On Saturday, together with my friends we made flower wreaths for cows so they walked back home from pasture all dressed up for the occasion. And Green Sunday is the day to gather medicinal herbs because they are imbued with special powers.
Our first canoe trip of the year. Algonquin welcomed us with calm waters, soothing whispering of the forest, puffy clouds and fiery sunsets, loons and mergansers, painted trilliums, new life springing from an old stump... for a few days the world made sense again offering something to hold on to amidst constant uncertainty and dread.