Camping is always good for my body and soul. Occasionally, though, along comes a trip so perfect and emotionally satisfying it feels like a dream. Our most recent trip to Algonquin was one of those. Minus the bugs. But then bugs are part of the camping package this time of the year.

Over the past few months we have been busy at work preparing for our big annual conference. And while the conference is always an exciting and truly inspiring experience, I knew that by the time everything was said and done I’d need some breathing space and time to unwind. So I booked a site at Algonquin’s Pog Lake campground.

This particular campground opened at the beginning of June and was pretty much deserted when we arrived. Plus campsite 471 that we booked was almost at the end of a dead-end road with lots of privacy. Perfect, especially for an introvert in me who’d just had to spend day after day in crowds 600 people strong. 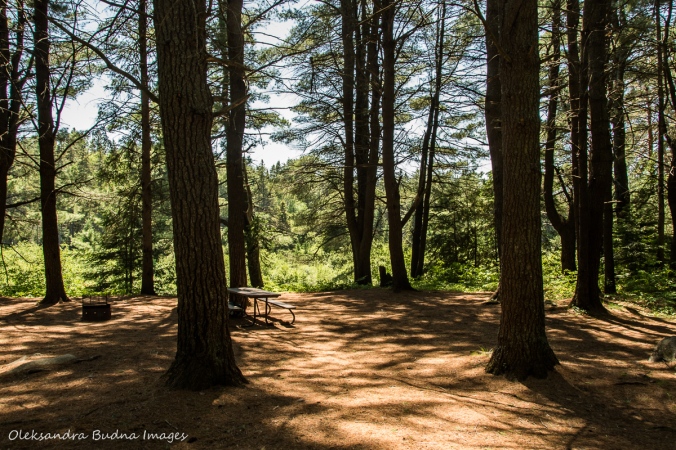 The site was right by the river and looked big and spacious in pictures so I was very excited about staying there. Imagine my surprise when we arrived and found our carefully selected site already occupied. My first thought was I’d mixed up the dates or sites, or both. But then it turned out it was the current occupants who’d set up on the wrong site. At first, I felt bad about having to ask this lovely, young couple to move. But after it only took them two minutes to carry their tent “next door”, I didn’t feel as guilty anymore. And definitely not the next morning when I went to explore their campsite and saw how much better ours was, definitely more secluded. Plus it had a nice access to the water. That’s where I spent half of my morning watching the water flow by.

I woke up before the rest of the family but had to pluck up the courage first to get outside. Our tent was surrounded by thirsty blood-suckers peeking through the mesh, patiently waiting for us to unzip the door. After about thirty minutes of trying to convince myself I didn’t need to go to the bathroom, I knew the situation was getting critical so I had to make the move. I carefully crawled through a small opening in the tent door trying not to let any mosquitoes in. I almost succeeded. 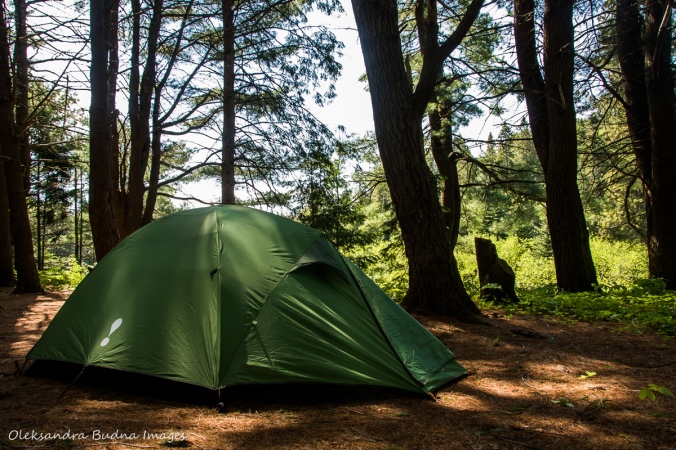 As much as I needed the bathroom, the first order of the day was bug spray. I don’t like to use it but I dislike bugs in my mouth and eyes even more. After a stop at the bathroom, I headed to the office to register where a ranger gave me a bear safety lecture. I kept nodding, then asked if there were any active bears in the campground. She replied they’d just opened a couple of days before so no bears had been attracted yet but there were five of them at the Canisbay campground. One even tried to steal some campers’ bacon as they were trying to eat it. Which is understandable because even I find the smell of bacon irresistible and I am a vegetarian. The ranger also mentioned something about the Ministry people being there. So maybe the bears just had some concerns to raise with the Ministry, like too many people or not enough bacon. Who knows. We didn’t see any bears during our stay. Probably a good thing.

When I came back, the family was still asleep so I went down to the water and spent some time on the rock letting the stream carry away my stresses. I then climbed back up to start breakfast. I made a small fire, not for warmth, but to escape mosquitoes in clouds of smoke because clouds of bug repellent weren’t as effective. 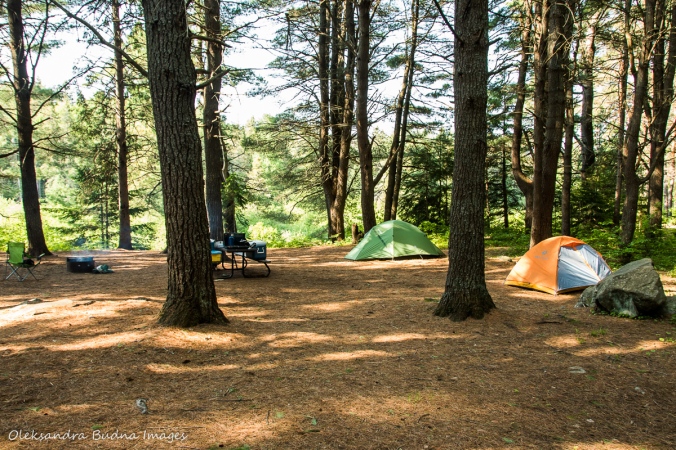 I didn’t have bacon to lure my husband and kids out of the tent but eggs and coffee worked too. After breakfast, we washed the dishes and packed everything up ready for our hike.

We had our sights set on the Centennial Ridges Trail. We’d never hiked it before and it was very close by so we didn’t have to crisscross the park to get there.

Trail access is off the Centennial Ridges Road located at km 37. The trail is a little over 10 kilometres long and is described as challenging with a promise of some of the best views in the park. 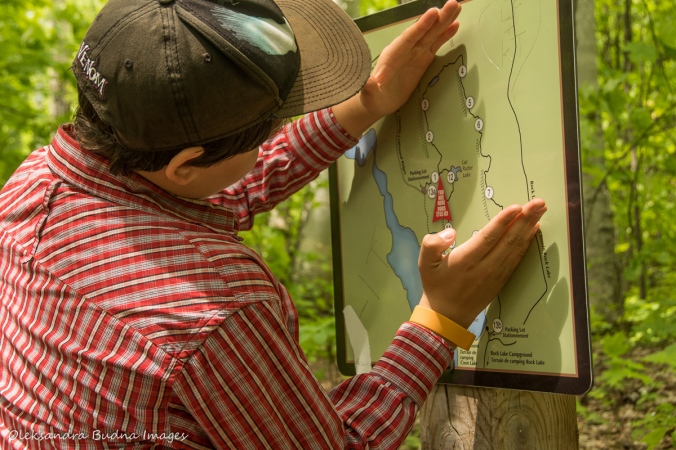 The trail was everything it promised to be — challenging with great views and an added bonus in the form of bugs. It follows five ridges so there was a fair share of up and down hiking. Surprisingly, we were dreading the downhill parts more than going up because it meant descending into the wooded, bug-infested and quite often muddy areas so, I guess, not so surprisingly after all. 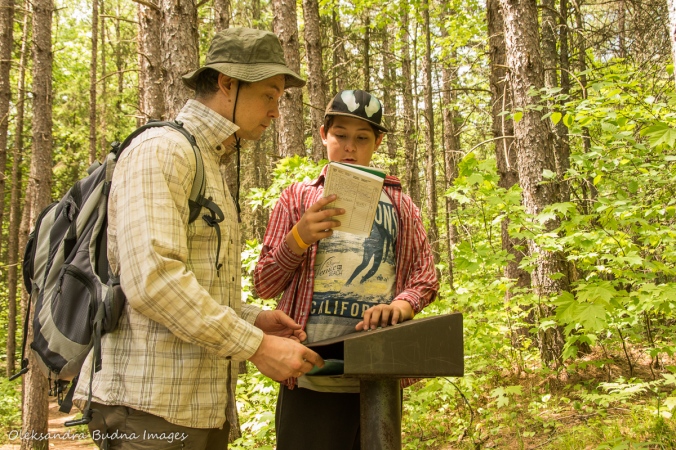 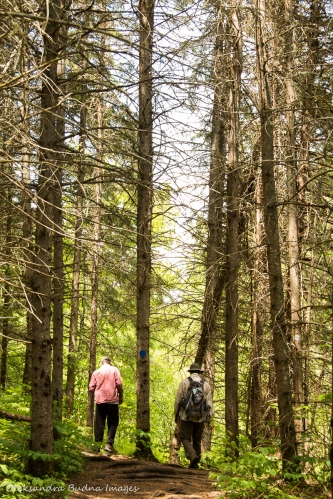 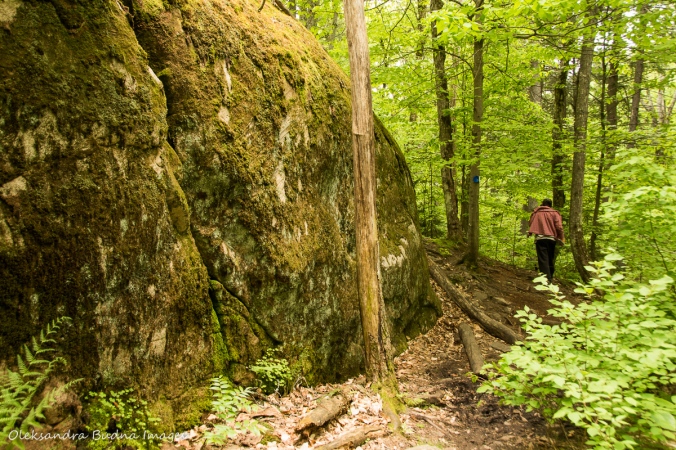 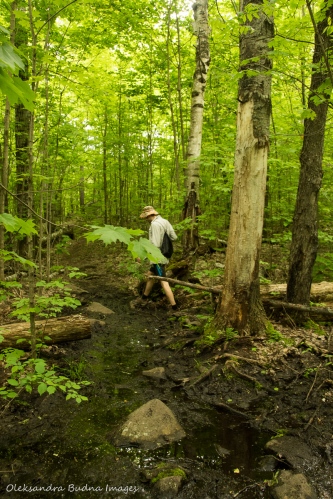 Going up, on the other hand, meant ridge top walking with spectacular views, refreshing breeze and minimum bug attacks. Those were our favourite parts.

There were also boardwalks, secluded lakes tucked in among trees and rocks, beaver dams and our only wildlife encounter — a lone merganser. 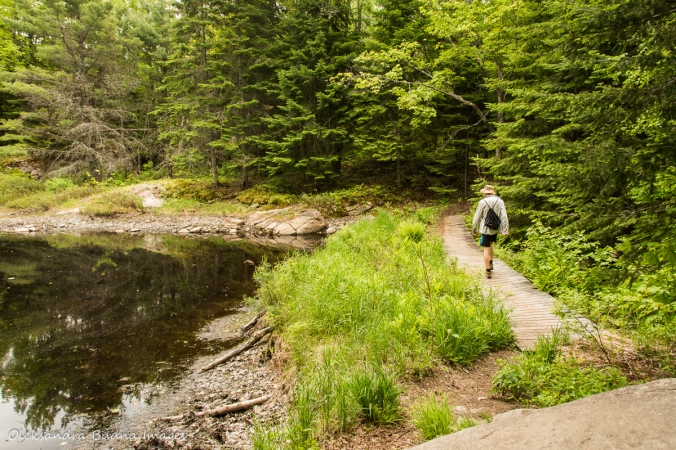 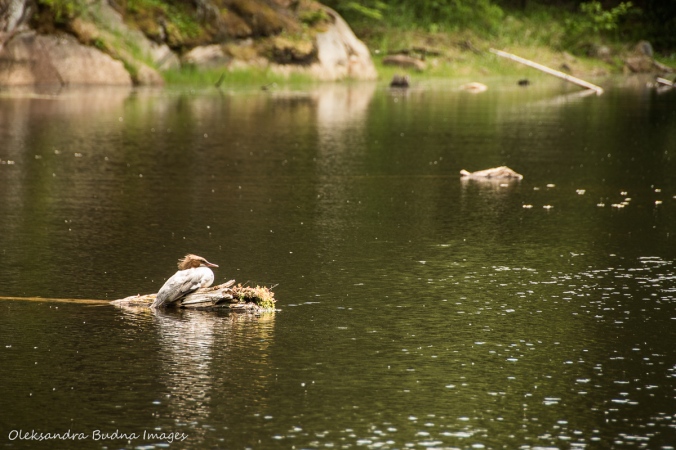 Pink lady slippers were scattered throughout the forest, along with various star-shaped flowers.

More than anything, the trail was an exercise in perspective. Every time we reached the top, the same part of Algonquin would open up: Lake of Two Rivers, Whitefish Lake, rolling wooded hills in the distance. But the view was always different: the lakes were getting bigger or smaller, the hills would get closer or move further away. 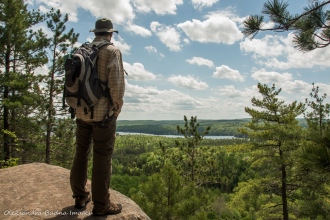 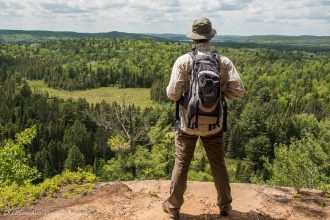 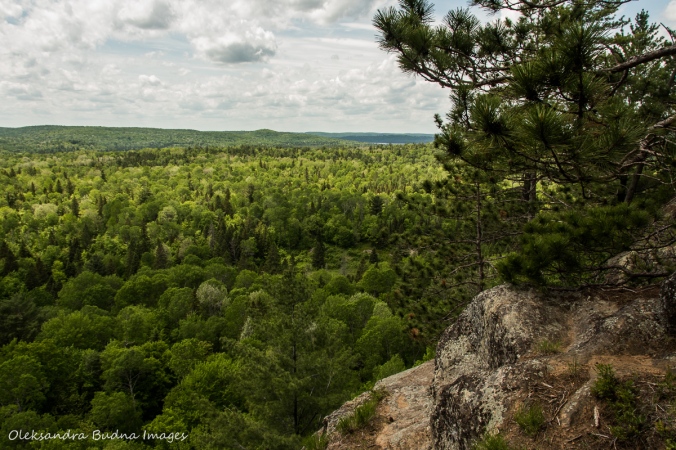 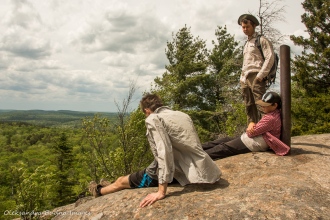 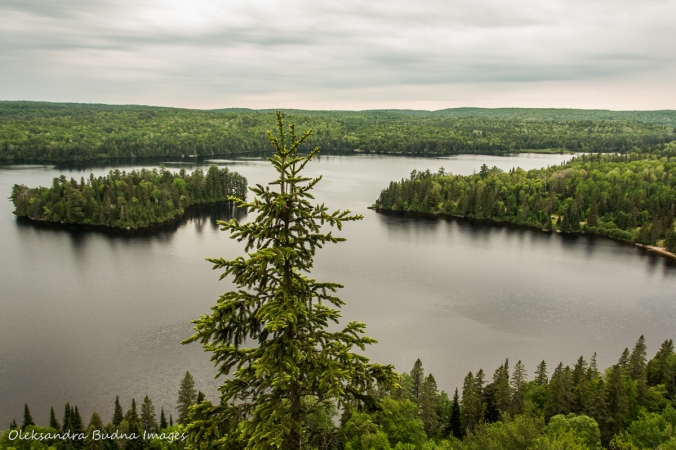 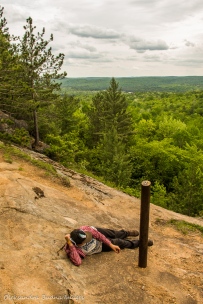 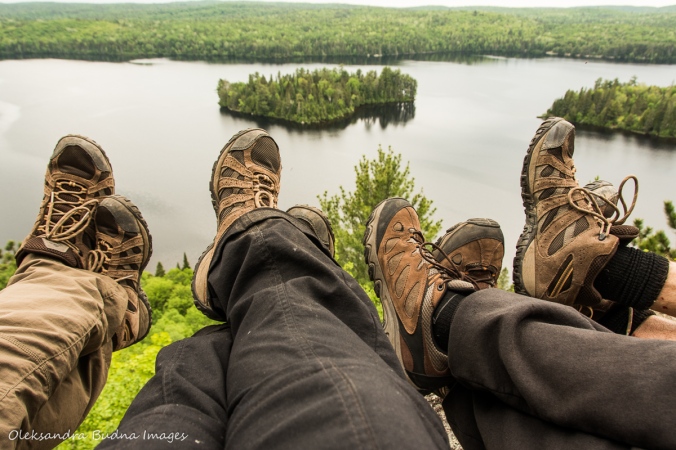 In the end, it took us about four and a half hours to complete the trail and that included numerous stops to take pictures and a lunch break.

We emerged from the forest sweaty and bitten but upbeat. Our older son refused to wear pants because mosquitoes don’t usually go after him. Turns out he is more of a black flies type: he had blood trickling down his legs by the time we finished. No worries, he has healed nicely since then.

After all the hard work we rewarded ourselves with veggie burgers, Muskoka Brewery beer with extremely relevant imagery on the can and some fancy s’mores. 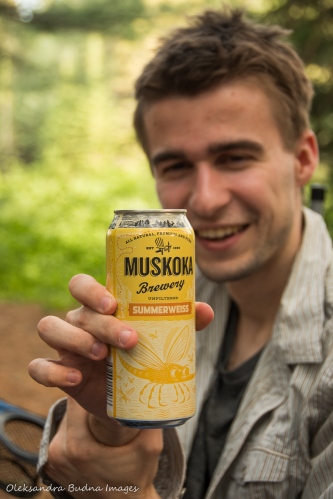 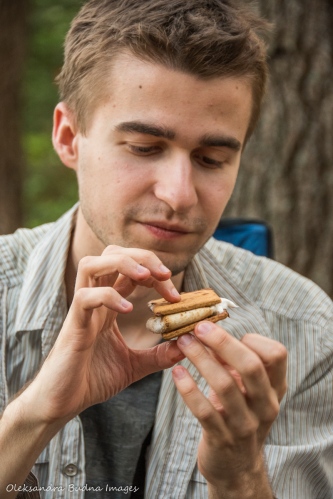 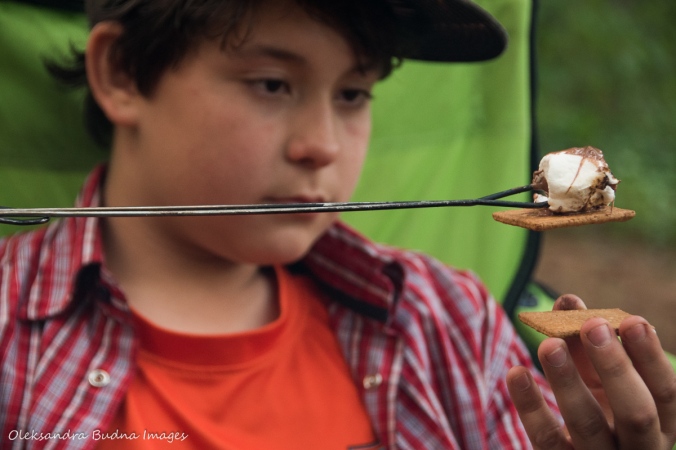 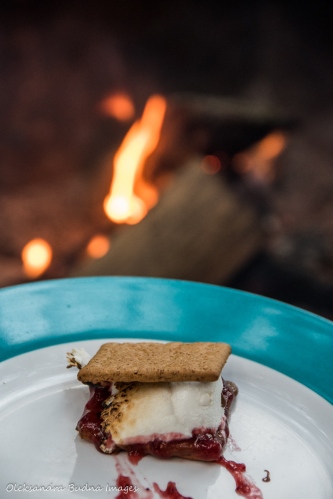 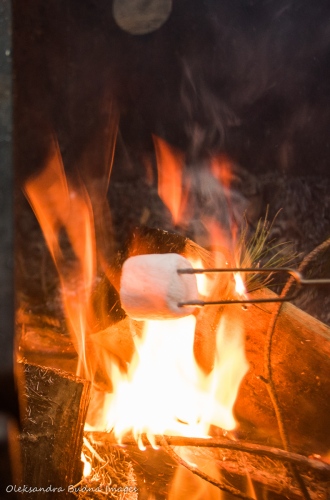 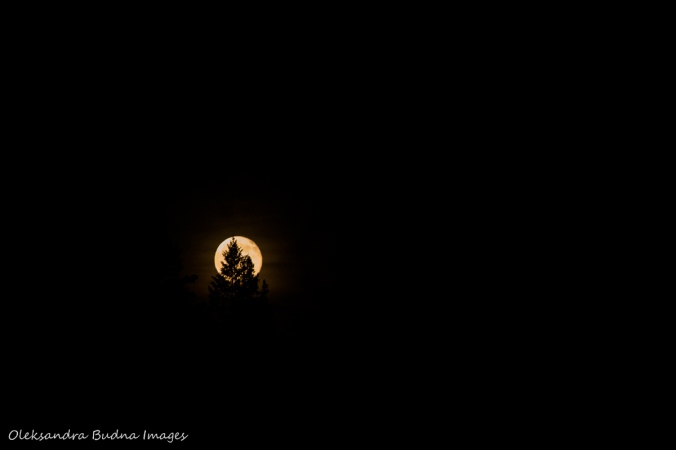 The next morning I was the first to wake up again. I really cherish those early morning hours of solitude, especially since the campground was so quiet. It almost felt like we were in the backcountry. We definitely saw more canoes and kayaks paddle by our site over the two days than cars on the road.

I savoured my coffee with a touch of birdsong. Then my younger son got out of the tent and we spent some time reading.

He then moved on to his artistic pursuits. I think that meditative, slow pace of the morning opened up or rather rekindled my own childhood love for drawing. The result was a “masterpiece” created with a piece of charcoal from the campfire. 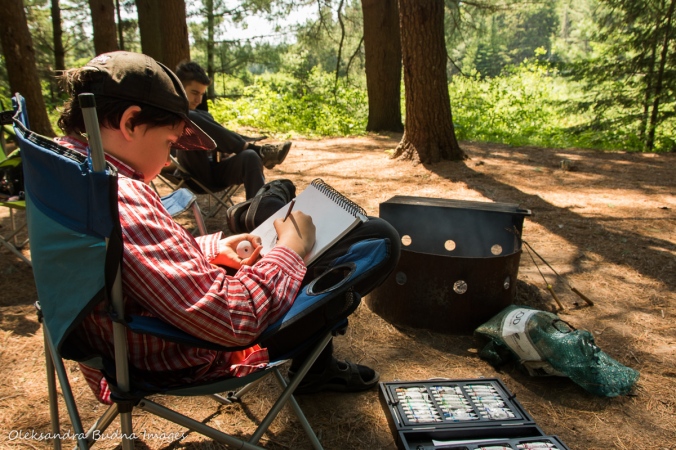 Eventually, it was time to pack and leave. But not without stopping for ice-cream at the Lake of Two Rivers store and our traditional post-camping meal at Westside Fish and Chips, which we have nicknamed a “teapot stop” because of its quirky decor.

It’s been almost two weeks since that trip. Our bites have healed and the itch has stopped but the effects of the meditative calm of that trip and Algonquin’s sights, smells and sounds are still lingering.

14 thoughts on “Our camping weekend at Algonquin: itchy bodies and soothed souls”

Canoes at Silent Lake: retired for the season
We were excited to find a bit of winter at Silent Lake Provincial Park this weekend. Exploring familiar locations in different seasons always feels like visiting a new place.
So much beauty in the change of seasons
Somewhere at the crossroads of autumn and winter
The first snow of the season is always magical
Trees turn wounds into works of art
November reflections at Etobicoke Creek
Yesterday I went for what was supposed to be an hour walk, which somehow turned into four hours of wandering around. Kept thinking about change, vulnerability, trees and what we could learn from them. No doubt inspired by Brené Brown's talks and Finding the Mother Tree book by Suzanne Simard.
Weekend hike at Boyne Valley: softer light, crisper air, crunchy leaves under our feet - November walks have a magic of their own