As someone very accurately pointed out in their comment to one of my previous posts, November is not the prettiest of months. Devoid of colour, without any kind of cover‎, be it foliage or snow, November landscapes stand with all their sharp edges and irregularities exposed, looking vulnerable and lackluster. While this year we’ve been extremely lucky (the planet not so much) with warm weather and fall colours lasting longer than usual, November inevitably arrived undressing the trees and injecting notes of melancholy into the air. Determined not to give in to its mournful call, we set out in search of beauty.

For our adventure we chose a place with a beautiful and mysterious name Eramosa Karst.  Located in Stoney Creek in the traditional territory of the Haudensaunee and Anishnaabeg, this park is the newest addition to Hamilton Conservation Authority. It is fairly small, but has the largest number of unique karst features in any single area in the province.

What is karst? It comes from a Slavic word that means barren, stony ground. It is also the name of a region in Slovenia that is well-known for sinkholes and springs. So geologists have adopted “karst” as the term for a terrain that features underground drainage, caves and passages caused by dissolving rock. The Eramosa Karst Conservation Area contains examples of 16 karst features, including soil pipes, sinking streams, overflow sinks, dry valleys and a 335 metre-long cave (the tenth longest in Ontario).

The park has the main Karst Features Trail with a few shortcuts and a number of shorter side trails. It all looked fairly simple on the map but somehow we managed to make a wrong turn and get lost, or should I say confused for a little while.

Eventually we figured out where we were and managed to see most of the parks features, like the Pottruff and Nexus caves. 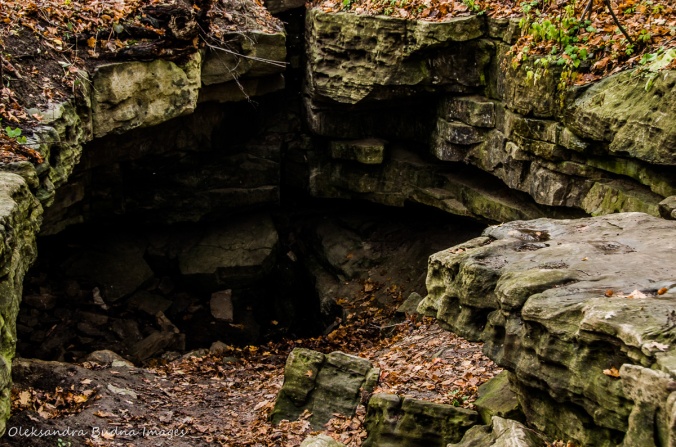 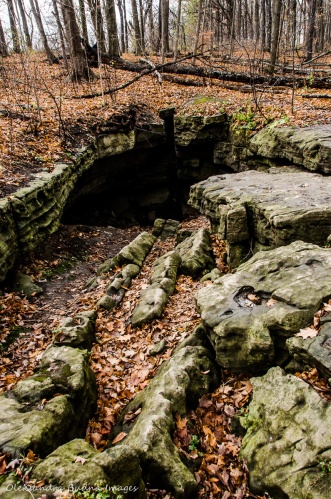 There were quite a few streams disappearing under the ground. 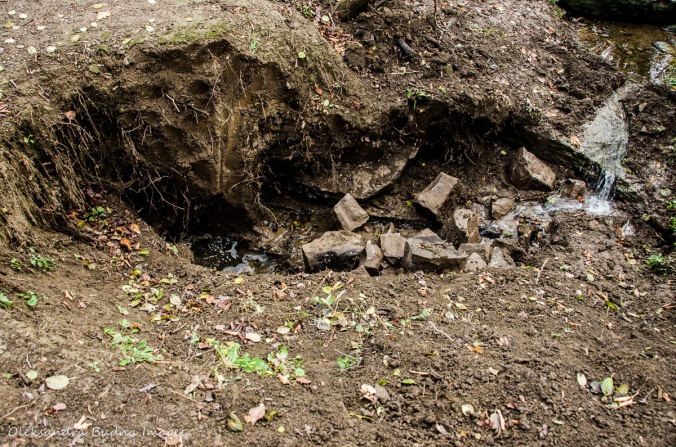 So all in all there were a few places for our son to climb and explore, which he enjoyed a lot. He also tried to look for geocaches but was experiencing some challenges so eventually he put his GPS unit away. He still found two more after that simply  because he thought the spot looked like a good place for a geocache. 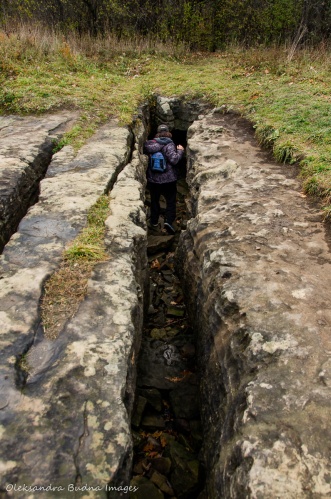 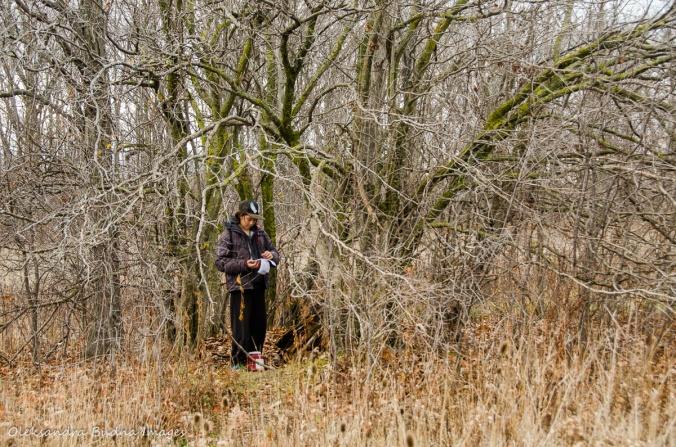 Because Eramosa Karst is located right in Stoney Creek, the city was hard to escape on some parts of the trail. But there were also many spots where it seemed distant and faraway. 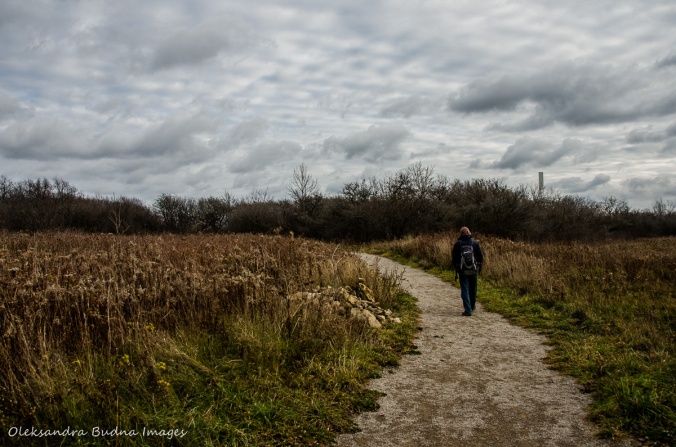 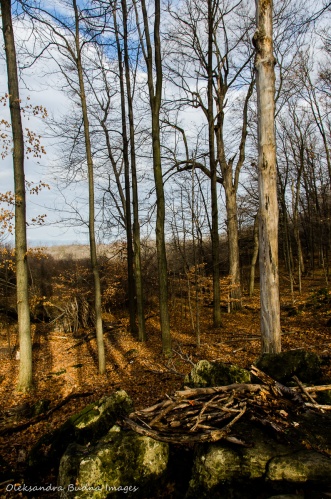 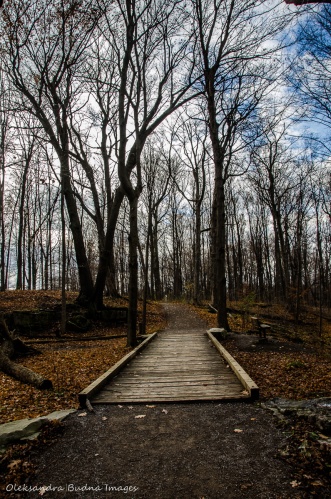 And there were so many beautiful, magical moments along the way, like clouds of moths fluttering around, their wings so translucent that they seemed to disappear into thin air (and therefore were hard to capture on camera unless they landed on a tree trunk). The light seeping through dry husks and bare branches. Spots of colour dotting the landscape. 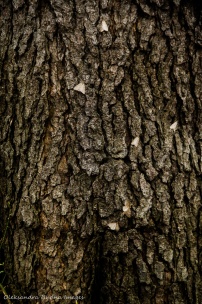 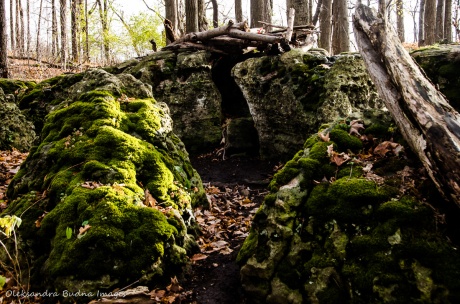 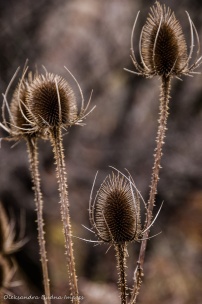 Our mission was a success: there was plenty of beauty waiting to be discovered. But most importantly it was a great reminder that while everything may seem bleak, nature is just resting before the explosion of colour that is sure to come in the spring. That sometimes those moments of vulnerability and quietness are not only inevitable but also necessary for all of us to come back stronger and more radiant.

4 thoughts on “Our search for beauty at Eramosa Karst”

Good night, Sleeping Giant
Another year, another incredible solo canoe trip. Although between five kilometres of portaging to and from Norway Lake and a 14-kilometre hike to The Crack, there seemed to be more walking than paddling this time. But whether on land or on water, Killarney never fails to mesmerize and enchant.
Every backcountry trip is a search for solace, serenity and balance, now needed more than ever. And sure our recent trip to Temagami threw a few challenges our way: paddling into the wind and waves, navigating swamps through obstacle courses of logs and stumps, carrying stuff over long portages through mud and clouds of bugs. But all the rewards we got in return! Temagami's rugged beauty, perfect stillness of early mornings, shimmering gold and vibrant reds splashed across evening skies, stories etched into rocks and spilled across lakes, wildlife sightings, whispering pines and loon lullabies... most importantly, finding something to hold on to amidst ongoing turmoil and dread.
Yesterday was what is known in Ukraine as Zeleni Svyata or Green Holidays. On this day, I always think of my grandparents and all the beautiful traditions associated with this holiday, like decorating the house with linden branches and herbs. On Saturday, together with my friends we made flower wreaths for cows so they walked back home from pasture all dressed up for the occasion. And Green Sunday is the day to gather medicinal herbs because they are imbued with special powers.
Our first canoe trip of the year. Algonquin welcomed us with calm waters, soothing whispering of the forest, puffy clouds and fiery sunsets, loons and mergansers, painted trilliums, new life springing from an old stump... for a few days the world made sense again offering something to hold on to amidst constant uncertainty and dread.
This year, as Easter collides with two months of war, at the intersection of death and a promise of rebirth, ever present dread for the land and people I love and awe of their unwavering spirit and bravery, horror at unimaginable sufferings inflicted by the Russian army and gratitude for all the support for Ukraine extended by people across the world, our Easter basket feels heavy. Heavy with pain and sadness. But it's also filled with hope. Hope inspired by the determination of Ukrainians to find joy and light even during the darkest times: by honouring Easter traditions, decorating their streets with pysanky (Easter eggs) for the holidays and some people baking hundreds of paskas (Easter bread) to ensure those who can't make their own, whether because their home has been destroyed, they were forced to leave it or are currently on the frontlines, can enjoy the taste of Easter too.
A few months ago, in what feels like a different lifetime, I remember being super excited when Blank Spaces magazine accepted my photos and a short piece about our neighbourhood brook. During COVID lockdowns, this narrow strip of water became my escape into nature, my bridge to the world, connection to my childhood and a similar brook that ran behind my grandparents' house in a small village in Ukraine. Now that the story is finally in print, in the fog of war in my home country, so distant and so painfully close, I'm struggling to find my way back to this nameless strip of ankle-deep water that has always been my place of peace...
Sunrise from my childhood home back in Chernivtsi, Ukraine, captured a few years ago.
Killarney always makes my heart sing no matter the season.