So finally the best part of our trip – Everglades. 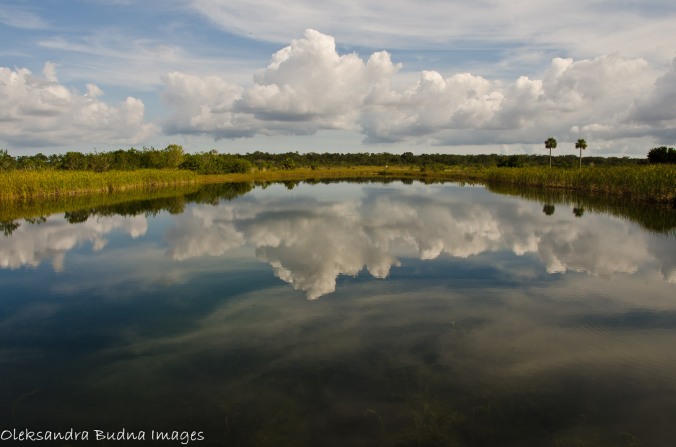 Our last stop before entering Everglades was Robert Is Here Fruit Market, a feast of colours and tastes. We packed our car with fresh produce, exotic dragon and star fruit, and locally grown mangoes and avocados and set out on the last leg of our journey. 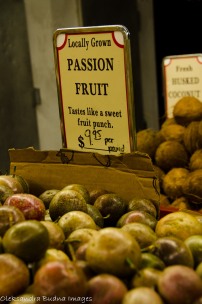 By the time we reached Flamingo Campground, it was already dark. The registration booth was empty so it took us a while to figure out how to get to the walk-in area where we had a site reserved. When I was booking a site, I was seduced by the walk-in’s proximity to the ocean. Drive-in and trailer campsites are not too far away but you can’t really see the water from there. I knew that the walk-in area was a big open field with an occasional palm tree. What I couldn’t know from the pictures was the fact that the area was pretty swampy with about a quarter of the sites covered ankle deep in water, something we discovered pretty quickly as we tried to pick a site by the flashlight. Another thing we weren’t prepared for were the mosquitoes. I did read other people’s accounts of practically ‘being eaten alive’ but I thought: how bad can it be, we’ve been camping a lot, we are not afraid of some mosquitoes. Well, I was wrong because there are mosquitoes and then there are mosquitoes at Everglades or rather, as we later found out, in the Flamingo area. But I’ll get to the bugs later, now back to our campsite.

We quickly realized that we would not be able to choose a proper site in the dark. Plus carrying all the gear from the car would take a while and all we wanted at that point was to get inside our tent. So we ended up setting camp right by the side of the road next to our car. I kept repeating, more to myself than others, that things would be better the next day. Yet, even in the morning I had my doubts. I must confess that for the first time in our camping history, I was contemplating leaving and looking for alternative arrangements. I am glad I decided to stay because we all ended up loving the park, bugs and all.

The next morning after an unsuccessful attempt to move to the drive-in area, which looked more shaded and cozy, we finally picked a walk-in site and moved all our gear there. I will not go into details but apparently the park uses a very ‘sophisticated’ manual site registration system and the staff don’t really know how many sites will be available until ‘the lady’ comes around midday to check all the sites and put up ‘reserved’ notes. After they told us to come back later for the third time, we gave up. It all worked out in the end. Our neighbours moved out that same night and we managed to occupy a site with a tree, a luxury at the walk-in campground. The tree provided shade, particularly useful in the morning if you want to sleep a little longer, but it also gave an illusion of privacy and was excellent for climbing, too. And that proximity to the ocean that made me book this site in the first place? It gave us a front-row view of incredible sunsets and sunrises. 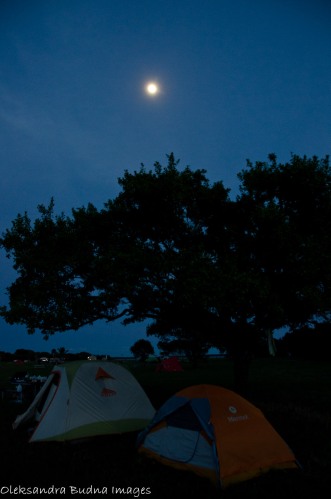 For more pictures of sunsets and sunrises, check out my Random|Pix blog.

Everglades National Park is the largest tropical wilderness in the United States, the largest wilderness area east of the Mississippi River and is visited on average by one million people each year. Most of those people come during the day and they usually stick to the Anhinga Trail and boat cruises. Anhinga Trail is a prime location for watching famous crocodiles and alligators as well as numerous species of birds. From the safety of a boardwalk, you can see crocs and gators everywhere, sunning, swimming, sleeping or maybe just pretending to be sleeping while constantly watching you from under their half-closed lids. It was exciting to see these prehistoric looking creatures but because of the sheer number of these reptiles and most importantly people the whole experience felt almost staged. Coming across an alligator during our canoe trip or riding past a gator family on our bikes felt more authentic, probably because there was no boardwalk to separate us from the animals. The birds were also a lot of fun to watch as were the manatees down by the Flamingo marina. Since the marina was only a ten minute bike ride from the campground, petting manatees was a daily must for our kids. 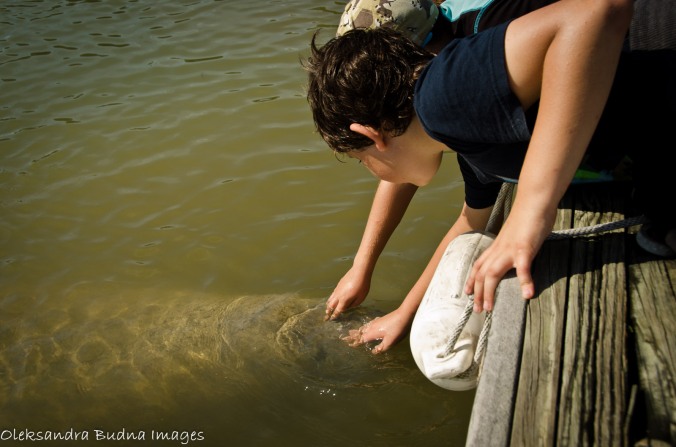 For more pictures of alligators, manatees and birds, visit my Random|Pix blog.

Another attraction at the Flamingo marina is a narrated boat cruise either into the backcountry or around the Florida Bay. We decided to skip it and get a full-day canoe rental instead (for the price of one boat ride ticket). For part of our expedition, we actually followed the boat and could hear the guide talk about the differences between crocodiles and alligators and different kinds of mangroves but then the boat sped away and we were left to explore on our own. Other than an occasional gator sunning on the bank and mangroves lining the shores, canoeing into the Everglades backcountry didn’t look or feel any different than canoeing in Canada.

When we tell people that we camped at Everglades, the first thing they ask us about is alligators and sometimes pythons. Somehow everyone has this idea that the park is crawling with these reptiles. Well, here is good news: while alligators are abundant around marshes and lakes, they don’t come to the campsites. There are lots of birds in the campground and every morning we would wake up to a flock of ibises grazing nearby or a pack of vultures trying to get to our food. As for pythons, they are very hard to find even if you go looking for them (as we learned during a ranger-led talk) so there is no danger of them falling on you from a tree. Our son did have a lizard fall on him on one of our bike rides, but no pythons were in sight. 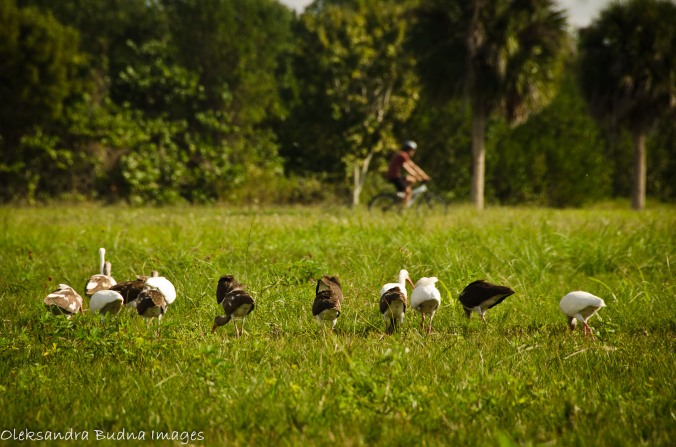 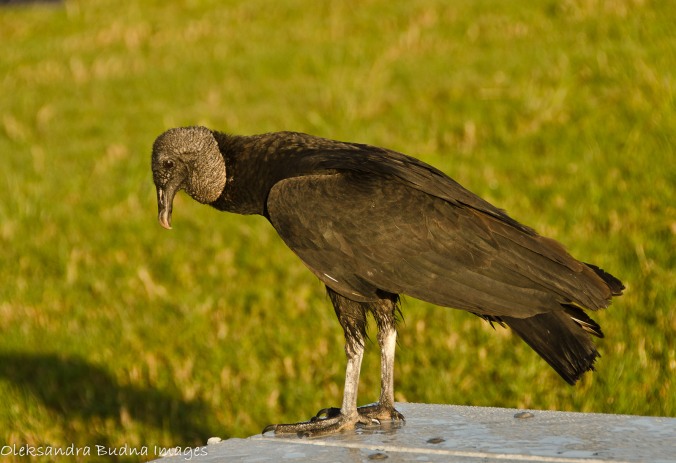 I still maintain that when it comes to ‘wildlife’ in Everglades, mosquitoes were the most menacing. I would like to say that it got better on day two but there were still as many of them. Plus they were joined by the so-called no-see-ums, tiny insects that you can’t see, as the name implies, but can definitely feel as soon as they bite. We were prepared though. By the time the sun set, we had finished our dinner, washed the dishes, packed all our food, put on pants and long-sleeve shirts, ready to retreat into the tent should it become unbearable. We even joked that we felt as if we were in a zombie/vampire movie waiting for the creature of the night to appear as soon as the last ray of sun fades away. Forced inside our tent so early in the evening, we played card games and Settlers of Catan listening to the buzzing outside. And early bedtime made us all into early risers, feeling rested and energized for the day ahead. We survived as do numerous people that go camping at Everglades every year (more than survived, actually, we really enjoyed it and are now considering doing some backcountry camping there), even though my husband did look like he had a severe case of measles by the time we were leaving.

I am happy to report, too, that in a few days the temperatures cooled down a bit in the evening and it even rained on New Year’s Eve reducing bug levels to bearable. We could spend our evenings outside and we were able to ring in the New Year by the campfire. Since we forgot to bring sparklers, our attempt to write 2015 with sticks and marshmallows failed miserably. It was a fun celebration nonetheless. We cooked an eclectic fusion of Japanese miso soup, Mexican guacamole and Italian gnocchi. Then, at twelve (or at least twelve according to our clock because not everyone seemed to agree on the time), we joined a growing chorus of Happy New Year across the campground.

Unfortunately, vacations always come to an end. On our way out, we made another stop at Robert Is Here market for the most delicious fruit shakes (that was our breakfast) and to stock up on more fruit. The fruit salad that I made on my lap in the moving car at the end of day one and the ugli fruit that we enjoyed somewhere around Pittsburgh felt like an extension of the holidays.

10 thoughts on “Our Road Trip to Florida: Part III – Camping at Everglades”

I wish to acknowledge and thank the traditional stewards of the lands through which we travel.